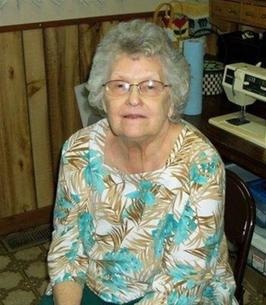 Ruby Jean Mackley Wilson, 86, passed away on January 1o, 2019. She was born on June 8th, 1932. The daughter of Joseph & Lillie (LaChance) Mackley.
She was married to Lindell H. Wilson on June 28, 1953. Three children were born of this union. Lindell and Ruby were married for over 50 years.
She was preceded in death by her loving husband, Lindell, one daughter, Ruth Anderson, and one brother, David Mackley.
She is survived by one daughter, Phyllis (Rick) Ward, one son, Lindell Wilson Jr, one sister, Emma (Tom) Minx, 6 grandchildren: Lindell (Tracey) Ward, Rhianna (Nic) Woods, Erica (Jed) Drinkwine, Tara Anderson, Tim (Heather) Anderson, and Misty (Nathan) Jarvis, 12 great grandchildren: Hadlee Woods, Elliot Woods, Crosby Woods, Morgan Eidsness, Emily Eidsness, Bronson Drinkwine, Lacey Anderson, Mason Anderson, Kennedy Anderson, Madelyn Anderson, Cassidy Ward, and Liam Ward.
Ruby loved spending time with her grandchildren and great grandchildren. She loved doing crafts and cooking. She was a cook for Potosi Elementary until she retired. She loved her church family as well. She was a charter member of Springtown Baptist Church. She was always there for services if she was able. She will be missed.
To order memorial trees or send flowers to the family in memory of Ruby Wilson (Mackley), please visit our flower store.