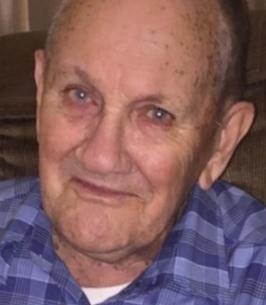 Darrell Leon Whitney of Potosi, Missouri, was born on May 3, 1930 in Aurora, Missouri, a son to the late Walter Whitney and Olga Vera (Davis) Brown. Darrell departed this life Thursday, July 23, 2020, having reached the age of 90 years, 2 months and 20 days.
On June 4, 1953, Darrell was united in marriage to the late Bonnie (Fisher) Whitney in Lawton, Oklahoma. They were blessed with sixty-five years together.
Darrell is survived by his daughter, Vicki (Kenny) Morgan of Potosi, Missouri; son, Tim Whitney of Potosi, Missouri; two grandchildren, Hillary (Jason) Portell of Cadet, Missouri, Whitney Morgan (Blake Yount) of Irondale, Missouri; five great grandchildren: Hudson, Morgan, Braxton, Gracie, Parker; Blake’s daughters, Cameryn and Carsyn Yount; one sister, JoAnn Jones of Aurora, Missouri and many cousins, nieces, nephews and friends (especially his McDonalds buddies).
In addition to his parents and loving wife, Bonnie, Darrell was preceded in death by his son, Stephen Whitney; father and mother-in-law, Thomas and Inez Fisher; brothers, Bob Whitney, Richard Whitney; three sisters-in- law, Lois Whitney, Pat Whitney, Nancy Haslag; two brothers-in-law, James W. Jones, Sr. and Thomas Fisher, Jr.
Darrell was a long time member of the Church of Christ. He helped build the church in Potosi, Missouri and was a teacher and song leader there for many years.
After graduating from Aurora High School in 1947, he went on to further his education at the University of Missouri. He obtained a Bachelor of Science degree in agriculture in 1953. He went on from there to serve in the United States Army, where he was honorably discharged as a 1st Lieutenant. During his military career, he received the Korean Service Medal, United Nations Service Medal and the National Defense Service Medal
Darrell started his career at the Farmers Home Administration, where he retired as a supervisor, after completing 33 years of Federal Government service.
He spent countless hours tending to his vegetable and vibrant flower gardens. He had quite the green thumb and could grow virtually anything, from Indian corn, to award winning pumpkins. He loved the outdoors and enjoyed quail hunting, catfishing, Purple Martins, and spending the day in a field looking for arrowheads and Indian artifacts. He had an amazingly keen eye for finding them.
Darrell was a friend to all and never met a stranger. He was a member of the daily “lunch crew” for years at McDonalds and made many long lasting friendships there. He loved his family and always made sure they were taken care of. He will be truly missed.
A private memorial was held by his beautiful gardens.

To order memorial trees or send flowers to the family in memory of Darrell Whitney, please visit our flower store.