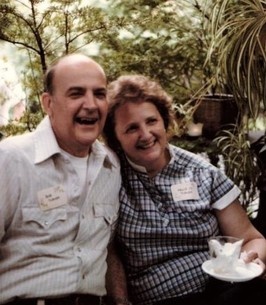 Nellie Jo was the only daughter and eldest child of the late Thomas Linn and Ruth Emmeline (Robinson) Henderson from the Belgrade - Caledonia, Missouri communities. From 2008-2019, she lived with her daughter and son-in-law in Desloge, MO and in 2019 until her death resided at Country Meadows in Park Hills, MO. She was born on June 23, 1930 in Flint Michigan. She passed away at Country Meadows having reached the age of 91 years 6 months and 2 days. Besides her parents, she was proceeded in death by her husband Robert Neal Turner, one grandson Brett Lynn Tiefenauer, two great grandsons, Nixon and Avery Abts, 2 brothers, Phillip M. Henderson, Thomas Richard Henderson and two sisters -in -law, Beatrice L. Henderson and Ruth Henderson.
As an inspiring artist, Nellie Jo presented her original artwork at the Chicago Art Institute at age 12 years old. Through her life, she pursued her passion for the arts in school and later by designing many beautiful wreaths and floral arrangements for the local church crafts bazaars.
Nellie Jo joined the Jobs Daughters in 1946, Bethel Chapter#2 in Owosso, Michigan; she graduated with honors from Owosso High School in 1948 and entered the fine arts program at the University of New Mexico- Albuquerque. While at the University she pledged and was an active member of the Alpha Chi Omega social sorority.
In early 1951, Nellie came to Missouri and lived with her uncle and aunt John V. & Lena May Sutton in Kirkwood, MO. She gained employment at the Reliable Life Insurance Company- Kirkwood, MO. and had modeling assignments for the former Famous-Barr Department Store. When her husband was transferred with US Steel to Pittsburg in the early 1960’s, she became active in several community, school and civic clubs in the Mount Lebanon Community of Pittsburg including Vice President of the popular newcomers Club of Mount Lebanon and worked part-time for several years at Kaufman’s Department Store (aka Macy’s Department Store division) and a local neighborhood Pittsburg Florist until she and Bob retired back to her family’s farm in Belgrade, MO in 1986.
Upon returning to Missouri to care for her mother, Nellie Jo became active in many church and local community activities; she was Treasurer of the Belgrade Methodist UMW for 10 years and helped with many church Christmas Bazaar with her flare for floral wreaths and pine cone crafts and coordinated a very popular ladies fashion show; she became a member of the Caledonia United Methodist Church in 2005 and helped with its bicentennial celebration (2007); was a member of the Cedar Lodge Extension club; in 2004 became a charter member of the reorganized Bellevue Valley Historical Society, serving as pro-temp Director while the organization was forming and was later awarded the honorary dictatorship of the historical society and the Caledonia Community Betterment organization in 2008. In 2015, Nellie Jo Joined the Sarah Barton Murphy Chapter of the DAR (Daughters of the American Revolution).
Nellie Jo and Bob loved to entertain in their Home and she was a wonderful cook and loved to try new receipts and make homemade bread for many around the Belgrade and Caledonia Communities.
Nellie Jo was from two of the oldest families in the Bellevue Valley area. Her paternal and maternal sides trace their roots back to the early 1800’s in Washington County. Maternally the Robinson’s came to the area in 1807 and on her paternal side dating back to 1816. Her great uncle was the first Mayor of the Village of Caledonia (1874); Nellie Jo was honored with the “ceremonial key” to the village by the Village board in 2007 and in 2019 along with her daughter and family and extended family were recognized as one of the founding families of Bellevue Township during Caledonia’s bicentennial celebration.
She married Robert Neal Turner of Kirkwood, Missouri on May 26, 1951 at the Kirkwood United Methodist Church with Rev. Harvey S. Aglin officiating. Witnesses were Marjorie Wilson and Douglas Becker. Robert Turner passed away after 53 years of Marriage in 2005. To this union two children were born.
Nellie Jo is survived by her two loving children; son Robert Michael “Mike” Turner and wife ( Basha) Quliei of Penngrove , CA; daughter Susan Linnell (Turner) Tiefenauer and husband Jeffery L. Tiefenauer of Desloge, MO; four grandchildren, Mrs. Brittani Linnell (Tiefenauer) Abts and husband Andrew (Drew) of St. Genevieve, MO, Mrs. Chelsea (Turner) Ross and husband Kyle of CA, Miss Lauren Turner of San Francisco, CA and Mrs. Heather (Tiefenauer) Lara and husband Alonso of Farmington, Mo; great grandsons Emmett Abts, August Jack Abts, Oliver William Abts, Landon Turner Ross, Tillden Ross; great granddaughters, Adelaide Linnell Abts, Meleah Gabrielle Lara, Elena Leigh Lara; one brother, Linn Bryan Henderson of Pheonix, AZ; sisters-in-law, Sandra K. Henderson of CA and Mrs. Sandy (Jack) Clark of Florida; special cousin Johnny Robinson of Caledonia, MO, nieces, nephews, cousins, and a host of friends.
A private graveside service was held Thursday, December 30, 2021 at Sunlight Cemetery in Belgrade, MO. Eulogies were given by Johnny Robinson, Jeffrey Tiefenauer with readings by Brittani Abts.
In lieu of flowers, memorial donations may be made to the Caledonia United Methodist Church at 106 Alexander St, Caledonia, MO 63631, American Cancer Society at P.O. Box 22718 Oklahoma City, OK 73123 and the American Red Cross at 10195 Corporate Square Dr. St. Louis, Missouri 63132.

All services were under the care and direction of Moore Funeral Home in Potosi, Missouri.

To order memorial trees or send flowers to the family in memory of Nellie Jo Turner (Henderson), please visit our flower store.