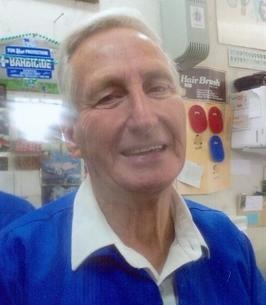 Bro. Donald “Don” Ray Strauser of Mineral Point was born May 13, 1946 in St. Louis, Missouri a son to the late Harry Earnest Strauser and Nancy Ada (Myers) Strauser. Don departed this life Monday, December 13, 2021 having reached the age of 75 years and 7 months.
On December 18, 1965, Don was united in marriage to Louise (Christeson) Strauser and together they served the Lord, raised a beautiful family and shared 55 years of wonderful memories.
Don is survived by his loving wife, Louise; sons, Donald Strauser and wife Misty of Cadet, James Strauser of Pilot, Knob; daughter, Stephanie Haws of Mineral Point; sister, Sharon Peck of Cadet; brother, Eddie Strauser of Potosi; grandchildren, Stephanie Jean, Abbie, Ryleigh, Cody; great grandchildren, Ezekiel, Elijah and many nieces, nephews, other relatives and dear and special friends.
In addition to his parents, Don was preceded in death by his daughter, Sucorra Zimmer; son, James “Jimbo” Christeson; brothers, Ronald and Larry Strauser; sister, Audrey Mayfield and niece, Amy Strauser.
Don dedicated his life to serving Christ, his Savior, at a young age. He always shared the gospel where ever he went. He served as the pastor of First Freewill Baptist Church of Potosi for 38 years. Don also served in the United States Army from 1966-1972 and proudly showed his patriotism throughout his life. He was a member of the UAW and worked for General Motors for 30.2 years. After his retirement from GM, he went on the open a barber shop, Legendary Cuts, which he operated for 21 years. There he became a staple of Potosi and made many friends throughout the years. He loved cars, his country, Elvis and Snoopy. Most of all, his true love was Christ. Family was very important to him and he loved unconditionally and with all his heart. He will be best remembered for his love, kindness and dedication to his community. His memory will be forever cherished in the hearts of the lives he touched.

To order memorial trees or send flowers to the family in memory of Donald Ray Strauser, please visit our flower store.