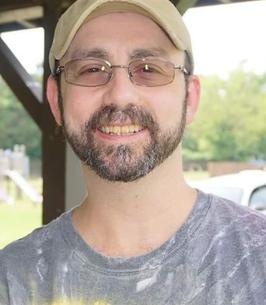 Brian was preceded in death by his mother, Carol (Dicus) Nixon of Mineral Point, MO, and his father, Jerry Russell of Potosi, MO.

Brian graduated from Potosi High School in 1990, and received a Bachelor of Arts degree in Graphics Design from Southeast Missouri State in 1994. Over the summers, Brian worked for Sunnen Industries where he helped to construct and maintain the new Fourche Valley Golf courses. It was during this time, Brian sustained a serious back injury.

Brian began his professional career at Lowe’s as a kitchen designer. He later joined Home Depot in a similar capacity, and was quickly promoted into department management. Afterwards, he was elevated into store management and transferred to various stores in Nebraska, South Dakota, and Illinois. In this corporate capacity, he developed a reputation for helping turn around underperforming stores. He ultimately declined an executive role requiring his relocation abroad. Brian later returned to Missouri in management with Aldi Foods. As his back injury became more debilitating, he worked as a custodian for the Potosi School District until he was no longer physically able.

Brian possessed many talents and had a wealth of knowledge across a variety subjects. He loved music and was a skilled guitar player and composer. Brian was an exceptional billiards player and competed nationally. Brian also loved the outdoors. He enjoyed hiking, camping, and fishing. He loved hunting mushrooms and developed quite a vast knowledge of mycology and lichens. His most recent endeavor was learning to grow and cultivate exotic edible mushrooms.

Brian was a gifted artist. He had a real knack for creating amazing tie dyed shirts—consider yourself one of the fortunate few if you were lucky enough to have received one from him. Brian was loved throughout the community and never seemed to meet a stranger. He was quick witted with a sense of humor that always left a smile on your face. The special memories Brian shared with all of us will be treasured forever, and he will be sorely missed.

In lieu of flowers, please consider contributions to the U.S. Pain Foundation or American Heart Association.

To order memorial trees or send flowers to the family in memory of Brian Lynn Russell, please visit our flower store.