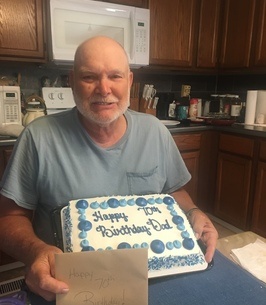 Larry Ossco Phares of Park Hills, Missouri was born July 13, 1949 in St. Louis, Missouri a son to the late Aubrey William Phares and Grace (Ives) Burg. Larry departed this life Tuesday, February 15, 2022 having reached the age of 72 years, 7 months and 2 days.
Larry was united in marriage to the late Roberta (Hedrick) Phares and they were blessed with many years and memories together. Roberta proceeded Larry in death on May 4, 2011.
Those left to cherish his memory are his sons, Eric Phares and wife Kristina of Farmington, Wade Phares and wife Valerie of Park Hills ; sisters, Sharon Cain of Potosi, Bonnie Stevens and husband Mike of Farmington; brother, James Phares and wife Rhonda of Potosi; grandchildren, Jazmin and Tyler and many other relatives and dear and special friends.
In addition to his parents and loving wife, Roberta, Larry was preceded in death by his brother – in – law, Bill Cain.
Larry had a loving and giving heart. He served in the United States Navy during the Vietnam era from 1969-1973. He loved all animals and took special care of dogs, cats, chickens and goats. He was a member of the Bread of Life Worship Centre and shared the Word of God. He enjoyed watching sports and never missed a St. Louis Blues or St Louis Cardinal game. In his leisure time, he loved spending time with his family, watching western movies and spoiling his grandchildren. He will be deeply missed by all who loved him.

To order memorial trees or send flowers to the family in memory of Larry Ossco Phares, please visit our flower store.