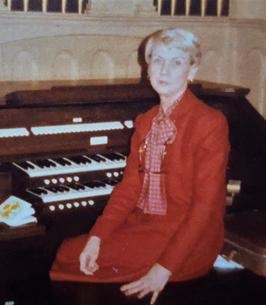 On Saturday, March 5, 2022, we lost an incredible ray of sunshine in our lives. Ruth F. Higginbotham Nickerson passed away peacefully in her Webster Groves, Missouri home in the loving care of family and friends. Born February 18, 1920, Ruth’s 102 years were ones of independence, musical talent, sharp wit, devoted care for others and generosity to many.
Born at Potosi Hospital, Ruth was the only living child of parents George Howard Higginbotham and Idabelle Smith. Educated in the Potosi schools, she lived through the depression, played on the women’s basketball team and began her music studies. She graduated in 1938 and received a scholarship to Central Methodist College to study music and English. While there, she met and married W.T. (Tribby) Nickerson after her graduation. They moved to Texas where Tribby obtained his Ordination as a Methodist minister. Together, they served in several churches in Texas and Kansas City, Ruth singing and accompanying on piano or organ.
Ruth returned to St. Louis on her own in 1961, to begin a very successful career as a music teacher in private schools and as an organist for various congregations across the city. She was proud to have been given the privilege to play some of the most illustrious organs in the region. She was honored to sing with the St. Louis Metros. Ruth always considered Potosi home and often returned to visit close friends, Wilma Loomis, Mildred Cresswell Graff, Dorthy Ann Watson and many Higginbotham cousins.
Ruth never forgot the importance of the music education opportunity Central Methodist College gave her, and gave back to the school by endowing their music library on the Fayette campus. Her philanthropic gifts extended to many non-profit organizations such as the Potosi Methodist Church, Souls Chapel Cemetery, and the new Potosi Towns Square project. She has been honored by both the Salvation Army and the Missouri Humane Society for her gifts. Volunteering for Meals on Wheels brought her great enjoyment after her retirement.
Traveling was a great passion of Ruth’s. She began traveling with her mother as well as her lifelong companion, her cousin Kathleen Sloan, on a three-week bus trip to California to visit family in 1933. Ruth traveled throughout the U.S., Europe and North Africa always making new friends and bringing home wonderful stories.
She is survived by her cousins, Mary Lee Swift, Laura Swift, Casey Ann Merriman and family of St Louis, MO; and Linda Higginbotham Schaller and family of San Francisco, CA.. Ruth was first a cousin of deceased Howard Cresswell Higginbotham, Hazel Higginbotham Weltch, Sally Cresswell Adams, Mildred Cresswell Sansegraw, and Roy Higginbotham.
Moore’s Funeral Home will oversee the graveside service on March 15th at the New Masonic Cemetery in Potosi, MO. There will be no viewing. Ruth will be buried next to her parents and close friend, James Schwartz.
In lieu of flowers, donations to the St. Louis Humane Society in her name would be appreciated.

To order memorial trees or send flowers to the family in memory of Ruth Frances Nickerson (Higginbotham), please visit our flower store.