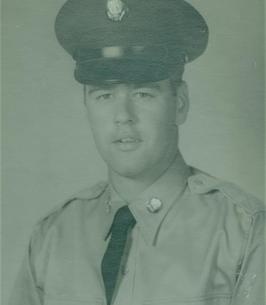 James Arthur Keener of Saint Louis, Mo was born on October 1, 1944 in De Soto a son to the late Walter Franklin Keener and Thelma “Margaret” Nadine (Whitehead) Myers. James departed this life Wednesday, July 14, 2021 having reached the age of 76 years, 9 months and 13 days.
On August 19, 1967, James was united in marriage to Winifred “Winnie” (Cole) Keener and happily shared nearly 54 years together.
James is survived by his wife, Winifred “Winnie” (Cole) Keener of Saint Louis; daughter, Angela Keener of Saint Louis and two grandchildren, Ashley Stock and Madeline Stock of St. Charles.
James honorably served in the United States Army. He was inducted on July 12, 1965 in Saint Louis, Mo and served during the Vietnam era in Korea. He was honorably discharged on July 11, 1967. At which time he transferred to the United States Reserves until July 11, 1971. He had received the Good Conduct Medal, National Defense Service medal and the Expert Rifle Badge.
James, better known as Butch by family and friends, had a passion for playing softball. He enjoyed street bikes and listening to music. He often would bartend for entertainment spending time with his family and friends. He will be deeply missed by all who had the pleasure of knowing him.

To order memorial trees or send flowers to the family in memory of James "Butch" A. Keener, please visit our flower store.