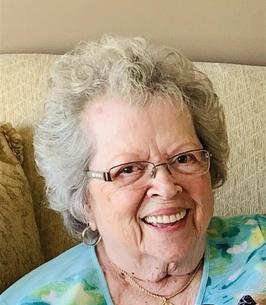 Sharon Yvonne Nash Hill of Potosi, Missouri, was born in Ironton, Missouri, May 23, 1937. She is the daughter of the late Ferman Wesley Nash and Leota Strickland Nash. She departed this life on Monday, February 7, 2022 having reached the age of 84 years, 8 months, and 15 days.
Sharon accepted the Lord as her Savior and was baptized at the age of 13, and has been a follower and lover of Christ, and has been a member of the Potosi Southern Baptist Church since.
She was united in marriage to Walter Merlyn Hill on April 16, 1955 and to this union two children were born. She is preceded in death by her late husband Merle. Survivors include her son, Dennis Hill & wife Diane Wallace Hill, and daughter Carla Hill Talbert of Potosi. Sharon had three grandchildren, Jaime Cavato of St. Louis, and Trevor Hill & Allison Hill of Potosi. She was the proud great grandmother of five great grandchildren: Sophia, Maria, Peter, & Sam Cavato of St. Louis and Ivy Harper of Potosi. Sharon is also preceded in death by her late Brother Dane Nash and her parents Ferman and Leota Strickland Nash.
Sharon was known throughout the community for “Grandma’s House DayCare”, and her more than 44 years of service in caring for the children of the area. She provided a home away from home for many children, some were second generation, which she referred to as “my DayCare grandchildren”. She will be dearly missed by many friends and relatives as she served a greater purpose in life, serving others with unconditional love.
Donations may be made to the Potosi Southern Baptist Church in lieu of flowers or gifts.

Funeral Service at Moore Funeral Home at 10:00 AM, Friday, February 11.

To order memorial trees or send flowers to the family in memory of Sharon Yvonne Hill (Nash), please visit our flower store.