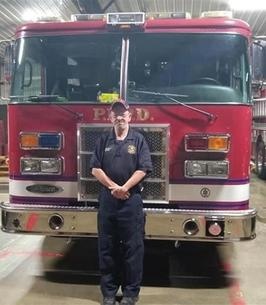 Timothy “Gomer” Lee Higginbotham of Potosi was born August 13, 1968 in Bonne Terre, Missouri a son of John Higginbotham and the late Nancy Sue (Braden) Higginbotham. Gomer departed this life Thursday, October 28, 2021 having reached the age of 53 years, 2 months and 15 days.
Gomer is survived by his father, John Higginbotham of Potosi; partner, Diane Bryant of Potosi; special friend, Ashley Dickey of Potosi and a host of other relatives and dear and special friends who he loved and cared for.
Gomer was blessed with a heart of gold and his life was solely dedicated to helping those in need. His career as a fire fighter began as a young boy, helping around the fire house following in his father’s footsteps. For 34 years he was a volunteer firefighter for the Protection District. Gomer joined the district on January 1, 1987. Gomer worked his way through the ranks of the department: Lieutenant, Captain and acting Chief. He mentored many new fire fighters and always made them feel welcome. He was always a phone call or radio call away and was ready to jump and go, no matter the task. When he was given an order or a job it was done. He was always ready to learn and try new things. In addition to the fire department, he was also dedicated to the Washington County Fair Board, Potosi Lions Club and many other community organizations. He never met a stranger and had a deep relationship with everyone. Out of all his accomplishments he never asked for anything in return and never boasted, everything he did came from his heart. He was a true example of what a courageous leader, friend and a loving family man should be. His memory and impact on the community will never be forgotten. He will be deeply missed by those who had the privilege of knowing and working with him.

In lieu of flowers, memorial donations may be made to the Junior Fire Fighters of Potosi Fire Department.

To order memorial trees or send flowers to the family in memory of Timothy "Gomer" Lee Higginbotham, please visit our flower store.