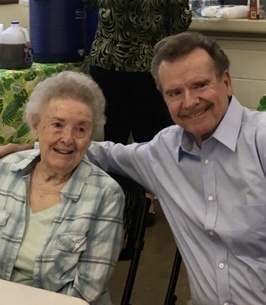 Iris Marie (DeClue) Henderson- Koch of De Soto, Missouri was born July 26, 1925 in Potosi, Missouri, a daughter to the late Theresa (Suiter) DeClue- Harrelson and Fabian DeClue. Iris departed this life Monday, December 28, 2020 having reached the age of 95 years, 5 months and 2 days.
Iris was united in marriage to Lindell Henderson and later to Matthew “Boots” Koch. Both were called to their heavenly home.
Iris is survived by her son, Ronald “Ron” Henderson and wife Phyllis of Valley Park, Missouri; daughter, Janice McClinton and husband Ralph of De Soto, Missouri; brother, Jim Harrelson and wife Erma of Potosi, Missouri; sister, Margie Carmon of Paragould, Arkansas; sisters-in-law, Geraldine DeClue, of Potosi, Missouri, Deloris DeClue of Potosi, Missouri; three grandchildren, Ryan Henderson of Chicago, Illinois, Thaddeus (T.J.) McClinton of Hillsboro, Missouri, Matthew McClinton of Desoto, Missouri; three great grandchildren, Sam McClinton, Cameron McClinton, Catlynn McClinton; one great great grandchild, Noah and many other nieces, nephews, other relatives and friends.
In addition to her parents and loving husbands, Lindell and “Boots”, Iris was preceded in death by her brothers, Danny DeClue, Edmond, DeClue, Glennon DeClue and Fabian “Ace” DeClue.
Iris had many God given gifts that she shared with those she loved. She was gifted a green thumb and kept a beautiful garden that was admired by those who passed by her home. She loved spending time outdoors, boating, fishing and taking care of her home. She was an avid reader and loved to read stories with lots of drama and romance. Her memory will be cherished by all who loved her.

The Family requests all visitors to please wear a proper face covering.
Memorials may be made to the Alzheimer's Association.

To order memorial trees or send flowers to the family in memory of Iris Marie Henderson-Koch (DeClue), please visit our flower store.