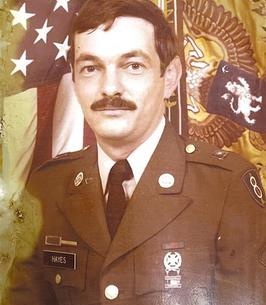 Keith Wayne Hayes of Richwoods was born July 23, 1954 in Festus, a son to the late Verna Mae (Bequette) Hayes and Francis Arthur Hayes. Keith departed this life Thursday, January 11, 2022 having reached the age of 67 years, 5 months and 19 days.
On May 20, 1978 Keith was united in marriage to Shelia Marie (DeClue) Hayes and they were blessed with 43 years and many wonderful memories.
Keith is survived by his daughters, Erin Bolden of Richwoods, Amanda Hayes of Richwoods, Victoria Hayes of Richwoods and Olivia Clubb and husband James of Williamsville; sons, Adam Hayes of Richwoods, Jake Hayes of Richwoods and John Hayes of Sullivan; sister, Esther Hayes of Sullivan; brothers, Jeff Hayes and wife Gail of Richwoods, David Hayes and wife Marsha of Richwoods, Richard Hayes of Florida, Ralph Hayes and wife Joyce of Jackson; 16 grandchildren, 6 great grandchildren and many nieces, nephews, other relatives, and friends.
Keith was preceded in death by his loving and devoted wife, Sheila and sister, Lisa Ann Hayes.
Keith devoted his life to serving his country. He retired as a sergeant from the United States Army. He loved to tell stories of his youth and travels to his children and grandchildren. He had a deep passion for the outdoors and took many hunting, fishing and camping trips. He loved singing karaoke, shooting guns and playing softball with his friends and family. He was an active member of his community and devoted his time to the local VFW. His family was near and dear to his heart and they stood by his side no matter the trials. He will be greatly missed by those who had the pleasure of knowing him.

To order memorial trees or send flowers to the family in memory of Keith Wayne Hayes, please visit our flower store.