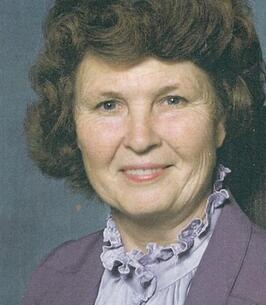 Edith Marie Shepard Halbert was born February 15, 1924 in Reynolds County, Missouri. She was the daughter of Clara Elizabeth (Johnson) Shepard and Anford Cicero Shepard. She passed away August 15, 2022 in DeSoto, MO at the age of 98.
She was preceded in death by her husband Perry Glenwood Halbert, her parents, her Son Jeffrey Linn Halbert, an infant sister, Evelyn, sister Ethel Murray and an infant great granddaughter.
She leaves to mourn her passing her sisters Ilene Smiddy and Christine Volner (Carter), daughter Elaine(Halbert) Braun (William) son Kent Halbert, two granddaughters, Colleen Braun and Tracy Penfield(Michael).There are eight great grandchildren: Abigail, Luke, Brayden, Aaron, Mallory, Owen(Penfield), Quinn and Grant(McCoy). There are also nieces, nephews and many relatives.
She attended school in Washington County, MO and graduated from Potosi High School in May 1943. That summer she passed a teachers examination which was a practice at that time and in the fall of 1943 she began teaching 1st through 4th grade at Shirley, MO. She attended Flat River Jr. College during summer and taught at Shirley another year. In September 1946 she began teaching 1st through 4th grade at another small rural school in Palmer, MO. There she met Perry Halbert who was teaching the upper grades. They were married August 23, 1946 and taught together another year. They moved to Desoto, MO, the summer of 1947 where Perry began at partnership in an accounting firm. Their daughter Elaine was born August 1947 and Edith became a mother and homemaker.
After Edith’s children were in school she worked part-time with Perry in the accounting business he ran until his death in 1994.
The Halbert family became members of the Church of Jesus Christ of Latter-day Saints in February 1960 and both Edith and Perry became active church members and at times held leadership positions. Edith became the first Relief Society (Women’s Group) president of the DeSoto congregation. Perry later served as Branch President of the congregation.
Edith had always been interested in learning about her ancestors and spent her later years doing family history research and accumulating many documents and pictures. Her plan was to compile them into history books, but macular degeneration caused her to lose much of her vision. It was a source of sorrow to her that for 10 plus years she could no longer read and finish her projects. She was very interested in learning about the activities of her granddaughters and great grandchildren. She also loved visiting members of her very large extended family. She looked forward to a joyous reunion with the many loved ones who had gone on before her while also wanting to stay with those still here. She will be greatly missed by those she leaves behind.
To order memorial trees or send flowers to the family in memory of Edith Marie Halbert (Shepard), please visit our flower store.