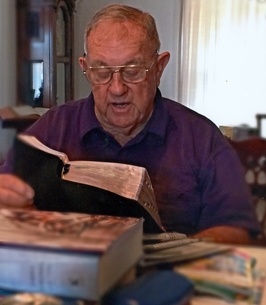 Alva Leon Gilliam of Potosi, Missouri was born June 14, 1930 in Belgrade, Missouri a son to the late Murphy Gilliam and Zona (Jenkins) Gilliam. Alva departed this life Tuesday, April 13, 2021 having reached the age of 90 years, 9 months and 30 days.
On August 27, 1946 Alva was united in marriage to the late Judith Gilliam and they were blessed with 72 years and many wonderful memories together.
Alva is survived by his sons, Gary Gilliam and wife Debbie of Potosi, Alva Lynn Gilliam and wife Donna of Farmington, Steve Gilliam and wife Alice of Cadet, Missouri; special friend, Danny Pyatt 16 grandchildren, 31 great grandchildren, 10 great great grandchildren, and many nieces, nephews, other relatives and dear and special friends.
In addition to his parents, Alva was preceded in death by his step mother, Mamie Gilliam; brother, Clement Gilliam; sister, Reva Morgan; great grandsons, John Edward Gilliam, Dustin Siedleman and Christopher Todd Fairchild.
Alva was a loving husband devoted to the love of his life Judith Franklin Gilliam. They were married just short of 73 years. But those who knew the story, knew he started giving her rides home on his bicycle in the 3rd grade.
Alva loved the Lord and shared that love with everyone he met. Throughout his life’s journey he loved to read his bible and talk about the Lord. He was dedicated to the principles of the Word and guided his sons with that knowledge. He loved his church family at Fellowship Baptist Church where he attended faithfully through many years of his life.
Alva enjoyed taking road trips. He would tell his sons “let’s take a little trip around town” then we would begin an adventure with him telling who lived here or there, what happened and when at this location, historic events as we past memories of life’s highways. Many of those trips around town took 4 to 5 hours and many miles from home. They will be sorely missed.
Alva began working at the age of 12 and at 13 was driving a truck hauling Tiff with his dad. There were many stories that were told of their adventures driving trucks as a family in New Mexico, Iowa and Texas. As he grew up he continued to love the trucking industry starting Gilliam Hauling and Excavating, Gilliam Ready-Mix and Gilliam Sanitation. He loved to work and guide others with his work ethics, honesty and Godly principles. Hard work continued even as he turned 90 he enjoyed working with Danny Pyatt; who he called another son, working on tractors and mowers in his garage. One of the great enjoyments in his life was spending hours on his lawnmower taking great pride in cutting his grass.
Alva truly loved all those who came and visited him throughout his last years. So many friends came and helped him through the worst of his loss and continued to encourage and inspire him through the end.
Alva was especially proud of going through all the degrees of Masonry with his sons. At that time, in the state of Missouri, it was the first complete family of father and sons who had went through all three degrees together. Later they would go through 32nd degree Scottish Rite together and he went on to become a Shriner.
We are so proud of all those who went above and beyond in your life to take care of dad. We are so thankful for our grandchildren that made a light shine in his life and gave purpose.
We want to give a special thanks to Serenity Care staff who have a special place in our hearts. Especially Crystal and Colleen (Toots) dad loved you as his own, THANK YOU!
Our family would also like to thank Ozark Heights and Fellowship Baptist churches for all you have done and provided through this time of loss.

To order memorial trees or send flowers to the family in memory of Alva Leon Gilliam, please visit our flower store.