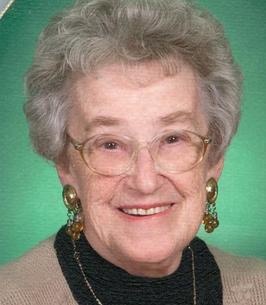 Joan Marie Elsey of Potosi, Missouri, was born November 18, 1932, in Washington, Iowa. Joan was a daughter of the late Harry Elliott and Blanche Agnes (Brown) Rodgers. Joan departed this life October 9, 2018, at Mercy Jefferson Hospital, having reached the age of 85 Years, 10 Months and 21 Days.
Joan was united in marriage to the late Russell Jack Elsey on January 26, 1952, in Shenandoah, Iowa.
Joan is survived by two daughters, Kerry Lynn Gavrilovic and husband Sava of Fenton, MO and Lisa Anton of Arvada, CO, two grandchildren, Natalie Gavrilovic of Kirkwood and Cori Campfield and husband Jason of Windsor, CO, one great granddaughter, Adelaide Campfield and by many other relatives and friends. In addition to her parents and spouse Joan was also preceded in death by one sister, Rosanne Vincent.
Joan and her husband Jack owned and operated the Elsey Motor Company in Potosi for many years. She was very active in her church and was the pianist and Choir Director for many years at the Potosi United Methodist Church and the pianist at the Potosi Presbyterian Church. Joan also served her community by volunteering for various causes. She had a great love for her family and cherished the time spent with them all.


In Lieu of flowers memorials may be made to:
Compassion International
12290 Voyager Parkway
Colorado Springs, CO 80921
800-366-7676
To order memorial trees or send flowers to the family in memory of Joan Elsey, please visit our flower store.