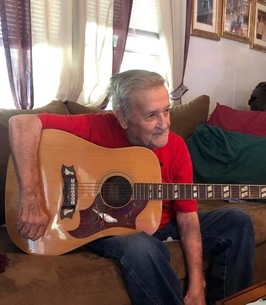 Floyd “Ticky” Sylvester Eckhoff of Cadet, Missouri was born April 15, 1934 in Cadet, Missouri a son to the late Gracie Marie (Jolly) Eckhoff and Arthur Eckhoff. Ticky departed this life Tuesday, October 27, 2020 having reached the age 86 years, 6 months and 12 days.
Ticky is survived by his loving wife, Leona Eckhoff; daughters, Linda Ross and husband Robert of Cadet, Missouri, Susan Eckhoff of Potosi, Missouri, Beth McCoy and husband Kevin of Potosi, Missouri; sons, Floyd Wayne Eckhoff of Bonne Terre, Missouri, Marvin Eckhoff of Leadwood, Missouri, Alan Eckhoff of Potosi, Missouri, Darrell Eckhoff and wife Shannon of Potosi, Missouri; twenty-nine grandchildren, Sara, Kelly, Miles, Constance, Joey, Bradley, Timmy, Billy, Tasha, Crystal, A.J. (Alan, Jr.), Richie, Jessica, D.J. (Darrell, Jr.), Colby, Heather, Sonya, Jered, Chopper, Cody, Aaron, Misty, Kristi, Bubba, Bethany, Matt, Brendan, Tara, Josh; forty-two great grandchildren; special family member, Jean Eckhoff and many nieces, nephews, other relatives and friends.
In addition to his parents, Ticky was preceded in death by his brothers: Donald, Russell, Buryle, Lilburn “Num” Eckhoff; sister, Frieda Mae Hahn (Leroy “Fuz”); great grandson, Kiersten Turner and great granddaughter, Maggie Sonya Mae Eckhoff
Ticky had a great love of many things, chief among them his cats, storytelling, going for drives around town, and eating every sweet in the house. But his number one love was always his wife. In 1952 Ticky married the love of his life, Leona Mae McGee, in Pocahontas, Arkansas. Through good, bad, thick and thin, they did this beautiful life together for 68 years. From this union came seven children, twenty-nine grandchildren and many great grandchildren who all have wonderful memories of their Dad and Grandpa.
Ticky made his living as an auto body man, repairing and painting cars and trucks. He spent most of his years in his garage with his brother Num. You could always find him there in the paint dust, enjoying happy times and making memories. Ticky passed on his passion for cars to his son Darrell, who carries on that business today.
He also loved horse races, spending many weekends in Kentucky watching his buddy Pedro on the buggies and at Fairmount Park where he bet on his favorite ponies alongside his track buddies. The nights at the race track usually started with a visit to Hodaks for some chicken and ended with a drive through White Castle - some of his favorite places.
There were also many summers spent at the softball field with Leona and his girls. Ticky was the coach of “Tick’s Chicks” and he enjoyed every minute of it. Leona pitched as his daughters played the outfield. He was very proud of his team. That time was truly a bright spot in his life. The girls he coached have never and will never forget him.
Everyone who knew Ticky can picture him with a fiddle in his hands. Many days and nights were spent playing his fiddle or his guitar. He passed on the love of music to all of his children. Nothing made them happier than an evening at a Jam session watching Ticky play the fiddle accompanied by Leona on her tambourine. One of Ticky’s favorite places was the Senior Center in Potosi, where he played music with people who shared the same joy he found in music. In later years he found true peace in nature. Friends often found him sitting outside, bird-watching, or tending his little garden. Ticky truly made an impression on every person he met. His smile, humor and love will always carry on.

To order memorial trees or send flowers to the family in memory of Floyd "Ticky" Sylvester Eckhoff, please visit our flower store.