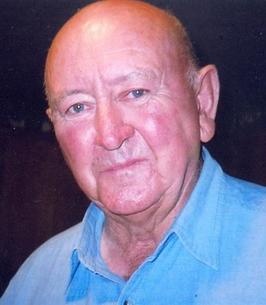 Paul Curtis DeClue of Potosi, Missouri was born June 19, 1933 in Potosi, Missouri, a son to the late Thomas Clarence DeClue and Beulah Elizabeth (Paul) DeClue. Paul departed this life Wednesday, July 13, 2022 having reached the age of 89 years and 24 days.
On December 31, 1961 Paul was united in marriage to Penelope Sue (Richards) DeClue. In an attempt to woe Penny, he sported a lady’s pill box hat to gain her attention while she was shopping for Les Petite Society at Reynold’s Clothing Store.
Those left to cherish his memory include his loving wife, Penelope of Potosi; daughter, Paulette DeClue and husband Dr. Brian Bilderback of Sullivan; grandchildren, Stephen Bilderback of Sullivan, Missouri, Ashley Sullivan and husband Nicholas of Arnold, Missouri; five great grandchildren, and many other extended relatives and dear and special friends.
In addition to his parents, Paul was preceded in death by his daughters, Amy Elaine DeClue and Nanette Sue DeClue.
Paul grew up on his family’s farm and enjoyed the simple things in life. He grew vegetables and gave them to families in the community. He received a full scholarship to Southeast Missouri State University which he declined to care for the family farm. In 1952, he tried out for St. Louis Cardinals and was beat out by one person with a slightly faster pitch. After trying out, he continued to play amateur league baseball locally. He was a proud veteran of the United States Army, having served from 1953-1955. During his time in the Army he was awarded the Korean Service Medal, United Nations Service Medal and National Defense Service Medal. His favorite place to visit was Royal Tokyo Rose Gardens which he visited upon his return from the Korean War. He was a charter member of the Potosi Elks Lodge #2218 and also helped with many activities involving the lodge. He was a hard worker and did not quit until the sun went down. He worked up to the age of 75. He was employed with Pea Ridge Mine and First Student Bussing out of St. Louis. He was a loving husband, father and genuine friend to all he met. He loved hunting, gardening, listening to polka music and watching the St. Louis Cardinals. His memory will be treasured by those who had the privilege of knowing him.

To order memorial trees or send flowers to the family in memory of Paul Curtis DeClue, please visit our flower store.