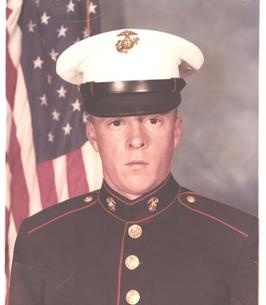 Michael Dean Davis of Irondale, Missouri, was born November 19, 1959, in St. Louis, Missouri, a son of Carma Sue (Barton) Davis and the late Paul Dean Davis. Michael departed this life October 10, 2018, at John Cochran Veterans Hospital having reached the age of 58 Years, 11 Months and 22 Days.
Michael is survived by his mother, Carma Davis of Farmington, MO, one daughter, Chelsea Griffin and husband Zach of Farmington, MO, two sons, Michael Davis and wife Amanda of El Paso, TX and Colby Davis of Farmington, MO, one brother, Terry Davis and wife Sandy of Irondale, MO, two sisters Paula Forrester and husband Pat of Irondale, MO, and Cathy Usher and husband Larry of Park Hills, MO, eleven grandchildren and by many other relatives and friends. In addition to his father, Michael was preceded in death by one brother Jeffrey Lee Davis.
Michael served his country in the United States Marines, enlisting November 1982 and retiring with an honorable discharge November 2002. During his service he received the rank of E-7, GYSGT. He was decorated with many medals, badges and citations, including the National Defense Service Medal (2), Sea Service Deployment Ribbon (4), the Kuwait Liberation Medal (Saudi Arabia), Kuwait Liberation Medal (Kuwait), Southwest Asia Service medal (3), National Defense Service Medal (2), Marine Corps Good Conduct Medal (6). After his retirement and honorable discharge he was subject to active duty recall by the Service Secretary until November 2000.
Michael was a police officer with the Dixon County Sheriff’s Dept. and the Bismarck Police Dept. until he took employment at the Bonne Terre Prison for the state of Missouri.
Michael enjoyed the many gifts of Mother Nature, especially hunting, fishing and camping. He had a great love for life, his country, his community and his family.

To order memorial trees or send flowers to the family in memory of Michael Davis, please visit our flower store.