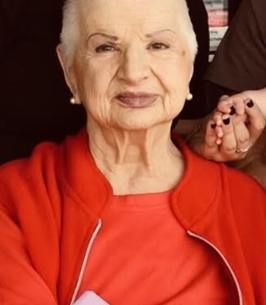 Sally Counts of Mineral Point, MO was born May 12, 1937 in St. Louis, MO , a daughter to the late Arthur “Otts” Brack and Lora Effie (Helton) Brack. Sally departed this life Tuesday, August 27, 2019 having reached the age of 82 years, 3 months and 15 days.
Sally is survived by three daughters : Lisa DeVore (Dwight) of St. Louis, MO, Penny Roberson (Michael) of Mineral Point, MO, Pauline Counts of Potosi, MO, one son James Counts of Mineral Point, MO, one sister : Margie Miner (Leonard) of Mineral Point, MO, five grandchildren: Amber, Ashlee (Khris), Aaliyah (John), Jarod (Jessica), Baylea Hawkins, five greatgrandchildren: Bailey, Kaleb, Jenna, Luke, Baby Roberson, special friends: Haley Watz Janie Wells, Pat Johnson, Gail Rasnic and special nieces : Joann Ryan, Tiss Rettig.
In addition to her parents, Sally was preceded in death by two brothers : James Thomas Brack, Robert Brack and special son-in-law, Kyle DeVore
Sally, Senior, her mother, and children, moved to Potosi in 1973. She loved her town and was proud to say that she was from Potosi, MO. She believed that she shared her home with good and loving people.
She began work at our local courthouse in 1978, with her dear friend, Buster. Although she left later that year to pursue a career with the Washington County Sheriff’s Department, she often reminisced about her wonderful memories and friends at the courthouse.
In 1978, Sally met her dear friend and sheriff of many years, Sonny Richards. She deliberated about a new job, but decided to accept Sonny’s challenge to join the Sheriff’s Department. She loved her work as a dispatcher, but later became commissioned as the first female Deputy by her other dear, respected friend and sheriff, Ronnie Skiles. She served in the office, transported prisoners, worked as a bailiff for her buddy, Judge Troy Hyde, as well as spending time on the road. She was always thankful for this opportunity and took her career very seriously. Sally often expressed great pride to serve with “some of law enforcement’s finest” over the next 32 years, until retiring in 2016.
Sally didn’t slow down after retirement, she was the center of her family and loved spending time with her children and grandchildren. She attended every recital, graduation, or special event she could, as she was her family’s biggest fan and cheerleader. She was an animal lover and always had a rescue pup or two to love and spoil. She was generous to many causes, giving donations for those in need.
Sally was a faithful Christian all of her life; she had a consistent and cherished relationship with her God always. She loved to talk about God, her many blessings, and share her faith with friends, family, and sometimes, even strangers. Her conviction never wavered, and in the end, only grew stronger. She believed that there was a beautiful place called heaven, where she would reunite with precious loved ones who had gone before her. She was excited to leave this earth and go home to her heavenly father.
In closing, Sally Counts would like the multitude of wonderful individuals who touched her life, to know that each of you were a blessing; her life was filled with love, laughter, kindness, and deep connections with people wherever she went. She was at peace to until the end, leaving this world knowing she truly was loved.

To order memorial trees or send flowers to the family in memory of Sally Counts, please visit our flower store.