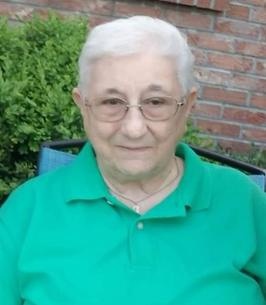 Genelle Cole of Potosi, Mo., died Thursday evening, April 2, 2020, at Missouri Baptist Medical Center in St. Louis, after a determined but difficult fight to overcome ovarian cancer. With the full name Margaret Genelle, she always felt Margaret sounded “like an old lady,” but few who knew her ever would have considered her old. Even as her physical health declined, her will and dry humor persisted. She was proudly stubborn and independent, often shy and spoke few words, but held fond places in her heart for many interests, activities and people.

She was born February 2, 1935, on the family farm in the Pleasant Hill community near Potosi to Willard LeClere Cole (d. 1986) and Mary Bollinger Cole (d. 2000). Allegedly spoiled by her grandparents and disinterested in kitchen and household tasks, she preferred following her dad on his farm chores and errands, and wandering the countryside. Naturally athletic, she dreamed of playing basketball and softball. Genelle attended Potosi Elementary and Potosi High School, played the clarinet in band, and was a class officer. Backed by her experiences growing up on the farm, she began a 50-year career as secretary in the Washington County University of Missouri Extension Center following graduation in 1953. She reported to work the day after returning from her senior class trip. From her desk in the county courthouse, she became an almanac of community information and a loyal supporter of countless civic activities and programs.

Genelle gave passion, time and talent to many organizations over her lifetime. She was a faithful member of the Potosi United Methodist Church and its stewardship. Gallons of blood donations in her earlier adult life paid forward to her later needs. She served as secretary for the county Farm Bureau, and as secretary for the Washington County Livestock Producers Association and their yearly feeder cattle sales. Genelle took pride in her family’s long history in the area, and was involved in the Mine Au Breton Historical Society and the Moses Austin Heritage Festival. She helped manage countless home economics entries and exhibits each summer for the Washington County Fair, she engaged with many 4-H families and projects, and was delighted by eventual development of the small animal barn on the fairgrounds.

A lover of Cardinals baseball and Mizzou basketball and football, Genelle also was a devoted fan to the sporting pursuits of nephews, nieces and the children of many friends. Her nieces and nephews also credit her with expanding their childhood vocabularies with colorful words and phrases—typically learned while watching her battle a lawnmower that wouldn’t start, barbecue grill that wouldn’t light, or a grease stain on her khakis. Though she lived her entire life in Potosi, Genelle enjoyed road trips and adventures when she could, and many albums plus trays of Kodak slides documented her U.S. travels with family and friends. Her hobbies varied over time, but she consistently loved gadgets, embroidery, traditional Country & Western music, a freshly mown lawn, songbirds, and to everyone’s surprise: a rather cantankerous cat, Maggie, who was her loyal companion for 17 years.

While not a particularly accomplished cook, Genelle knew how to whip up a legendary mountain of perfect mashed potatoes (she would easily spot and snub a bowl of the instant variety), and she never ceased valiant attempts to carry on her mom’s traditions of a pecan pie for company occasions, and a date roll at Christmas.

She was a faithful member of the crew of Methodists who caringly serve meals and provide comfort to grieving families at their own times of loss. In this current period of abundant caution for the health of our communities, Genelle will be interred alongside her parents in New Masonic Cemetery, Potosi, following a graveside ceremony. A future gathering will be planned so that friends and loved ones can assemble to share stories and celebrate her life, together.

Memorials can be offered to the Potosi United Methodist Church, Mine Au Breton Historical Society or The American Cancer Society.

Especially throughout recent months, many thanks and heartfelt appreciation go to those friends and healthcare professionals who have cared for her, offered up prayers, brought cheer, and provided immeasurable support to Genelle and her family.
To order memorial trees or send flowers to the family in memory of Genelle M. Cole (Cole), please visit our flower store.