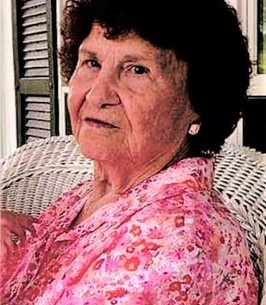 Maudie Marie (Nash) Cain a native of Mineral Point and longtime resident of Irondale and Potosi, Missouri sat down at the feet of Jesus September 28th 2020 at the age of 89 to worship for all eternity. Maudie was born June 3, 1931 in Mineral Point, Missouri, a daughter to the late John Francis Nash and Elizabeth (Vandergriff) Toppin.
Maudie was united to Dave Skaggs and later Roy Wm. Cain. Roy and Dave were called to be with Jesus.
Those who remain to mourn her passing are her daughters, Brenda Castillo and husband Jerry of Potosi, Missouri, Anna Grupe and husband Dane of Hamburg, Illinois, Linda Winick and husband Chuck of Potosi, Missouri, Joyce Cain and Potosi, Missouri, Irene Kearns and husband Will of Diamondhead, Mississippi, Alma Sheridan and husband Ed of Woodstock, New Hampshire; sons, Larry Skaggs of Potosi, Missouri, Ronald Cain and wife Joy of Potosi, Missouri, Everette Cain and wife Anne of Park Hills, Missouri, Wyman Cain of Park Hills, Missouri; 64 grandchildren, 167 great grandchildren, 123 great great grandchildren and many nieces, nephews, other relatives and friends.
In addition to her parents and husband Roy, Maudie was preceded by her daughter, Deborah Eckhoff; sons, Donald Cain, Pete Cain, Bobby Cain, Johnny Cain, David Cook-Skaggs; sisters, Rhoda Eckhoff, Delores Sansoucie, Lorene Saunders, Leona Pickett; brothers, Leonard Nash, Ronald Nash, Bobby Nash, Arthur Nash, Ernest Nash; five grandchildren, Ashley Skaggs, Donald Cain, Jr., Roy Cain, Victoria Cain, Cynthia Cin; two great grandchildren, Christina Weir, Lucas Cain and great great grandchild Gage Cain.
Maudie was kind and caring always putting others before herself. She was a bus driver for the Leadwood and Potosi school district, LPN at the local nursing home, worked at the sawmill with her husband Roy and owned the Tiff Digger Diner in Potosi. She kept a lush and colorful garden, canning a lot of her own food and raised chickens. She loved to read and was the number one fan of Elvis Presley. Her family, particularly her grand babies were the light of her life. Though she has been called to live with her savior her memories will live in the hearts of all who loved her.


Memorial donations may be made to the Alzheimer's Association

To order memorial trees or send flowers to the family in memory of Maudie Marie Cain (Nash), please visit our flower store.