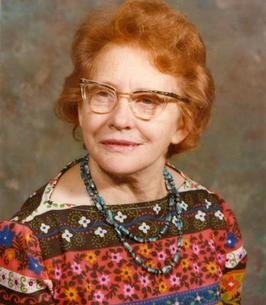 Dorothy Hasselteen (Pigg) Boyer of Cadet, Missouri was born December 28, 1920 in Greenville, Missouri a daughter to the late Marrion Erastus Pigg and Hattie Elenor (Clubb) Pigg. Dorothy departed this life Monday, May 18, 2020 having reached the age of 99 years, 4 months and 20 days.
On April 24, 1970 Dorothy was united in marriage to the late Claude B. Boyer and they were blessed with many years together.
Dorothy is survived by her special niece, Patricia (Ed) Crenshaw and their son, Ashley, of Greenville, Missouri; two step sons, Paul Edward Boyer and wife JoAnn of Fenton, Missouri, James “Jim” Rayfield Boyer and wife Elaine of Potosi, Missouri; two step daughters, Mary Pat Pratt and husband Michael of Viburnum, Missouri, Cyrilla Boyer of Cadet, Missouri and many step grandchildren, step great grandchildren, nieces, nephews, other relatives and dear and special friends.
In addition to her parents and loving husband, Dorothy was preceded in death by her step daughter, Veronica Juliette; step son, Joseph Clifford Boyer; six brothers: Leslie Marion Pigg, Jesse Newton Pigg, Earnest Walter Pigg, Willard Leroy Pigg, Floyd Edgar Pigg, Paul Elmer Pigg and one sister, Margurite Marie Harris.
Dorothy was a kind and caring friend to all. She was a 1942 graduate of Greenville High School and taught elementary school for two years at Greenville. After teaching, she worked as a secretary for International Shoe in St. Louis, Missouri retiring there and then Kingston K-14 School District for twenty-three years, before retiring in 1995. She was a devoted member of St. Joachim Catholic church and was involved with many activities and foundations throughout the community. She always kept a well-manicured garden of brilliantly colored flowers and vegetables. Her memory will be cherished by all.

To order memorial trees or send flowers to the family in memory of Dorothy H. Boyer (Pigg), please visit our flower store.