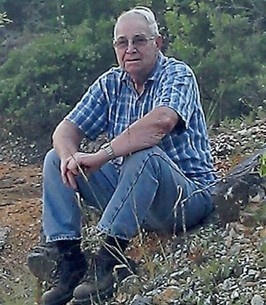 Robert “Glen” Bone of Mineral Point, Missouri, passed away on February 24, 2021 at his home having reached the age of 93 years, 350 days. He was born on March 11, 1927 in Mineral Point, Missouri, a son to the late Martin Bone and Irene (Cole) Bone. Glen was united in marriage to Beatrice “Patty” (Smith) Bone on September 25, 1954 and one child was born to this union.
Glen is survived by his daughter, Glenda Bone of St. Louis, MO and his goddaughter, Angie McCrorery (Parsons) of Farmington, MO as well as many extended family members and friends, and his granddog Ollie.
In addition to his parents, Glen was preceded in death by his wife of 63 years, two sisters, Wilma (Bone) Cole and husband Herb; Madeline (Bone) Walton and husband Virgil; as well as his five brothers; Noah “Pooky” Bone and wife Daisy, Bernard “Bubby” Bone and wife Louise, Charles Bone and wife Ann, Howard Bone and wife Margaret and Leonard Bone and wife Dorothy. He was also preceded in death by his godson, Floyd “Bingo” Parsons.
Glen was a hard-working man who enjoyed the simple things in life. He was a spiritual man and although he did not attend church he believed in God and the many miracles that he bestowed. He never met a stranger and always talked to everybody. He loved animals, dogs especially, and being outdoors. In his younger years he enjoyed quail and duck hunting with his bird dogs. Every year he couldn’t wait until spring so he could forage for morel mushrooms and put in his garden. He was an avid gardener and planted a vegetable garden every year. He always planted enough to feed an army and what wasn’t eaten or canned was given to friends, family, co-workers and church members. Glen was a graduate of Potosi High School, class of 1945. Although he didn’t have a degree in engineering, he had an engineer’s mind and could figure out how something worked and knew how to fix just about anything. Glen spent most of his career in the local barite “tiff” mining industry, starting out running samples, then as a dragline operator, then foreman and finally as superintendent of mining. He was always interested in any kind of mining and loved the show “Gold Rush”. .
Glen fought and beat prostate cancer, thyroid cancer and skin cancer, but colon cancer was too much a foe for him to conquer. He will be fondly remembered and dearly missed for his sense of humor, intellect and his love of nature and animals.

To order memorial trees or send flowers to the family in memory of Glen Bone, please visit our flower store.