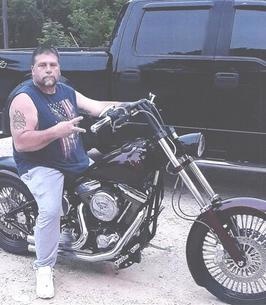 Bryan Keith Adams of Potosi, Missouri, was born June 18, 1967, in Bismarck, Missouri a son of the late Michael Willard Adams and the late Leanna Jeanette (Brooks) Comparato. Bryan departed this life Sunday, June 2, 2019, having reached the age of 51 Years, 11 Months and 15 Days.
Bryan is survived by his wife Kelly (Knichel) Adams, they were united in marriage on July 23, 2016, in Potosi, Missouri. He is survived by one daughter, Page Adams of Florida, one son, Zachary Adams of Festus, MO, one step-daughter, Haley McConnell of Caledonia, MO, two sisters, Carrie Sederstron and husband Randy of DeSoto, MO, Michelle Whitehead of Sullivan, MO, two brothers, Todd Adams of Lemay, MO, and Dwayne Adams of Sullivan, MO.
Bryan had a great love for truck driving and traveling throughout the area and especially taking time to ride his motorcycle. He enjoyed the many gifts of Mother Nature, being outside, playing golf, fishing and swimming. One of his greatest loves was woodworking, he has left many of his talents to be cherished and remembered forever.

To order memorial trees or send flowers to the family in memory of Bryan Keith Adams, please visit our flower store.